The Android app market is as dynamic as ever, you will need top android app developers to leave your mark on the industry. We have developed apps ranging from notepads to full-fledged PC inspired graphics games. 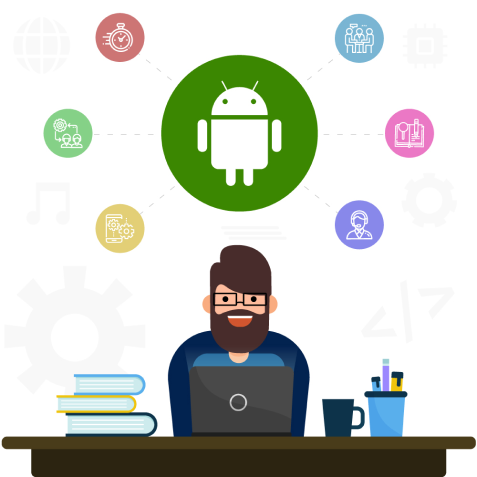 Android devices are offering a lot of raw power in there, but it squares down to Android developers who can utilize those gigs of RAM well. Phones are being offered with over 16gbs of RAM nowadays and the applications still lag behind iOS. Our top developers have a specialization in making an application that rather than just being fun to use, works so much similar, if not better, in Android than in iOS. It takes a special skill to build apps so optimized in Android, and our developers have plenty of it.

We as a company don’t just sell a service when you hire Android developers from us, you will know the difference in quality and satisfaction. SemiDot has been serving as a top Android development company since it became mainstream. Our vision is to focus on ways to implement the wildest of your dreams’, into a reality. The difference between mobile apps is subtle, understanding key differences are the key to success for an Android mobile application.

Expertise of our developers

Our top Kotlin developers are seasoned with all ins and outs of Android development, they will develop your Android app in the least possible time and least possible cost.

One of our prime services is Android app designing, and it is possible through extensive experience of developing over 100+ Android apps, for different business types and niches.

We offer services to make a complementary app for wearables, this will ensure you always stay ahead of the curve, while your users get the maximum benefit of buying wearables.

We have a separate team for Android game development, we have made small, to enormous power-hungry games, we will create yours just the way you want it to be.

We also work on Apps to be deployed on the Android tablet market, which is a small but profitable field, and since people are switching to tablets, it is now but a necessity.

You can hire Java experts who have years of experience. With Java being one of the core Native Android development languages, we can make a truly custom Android app.

You are Jack’d - Be Yourself

Where Texting Collides with Video

There are a few fundamental things to take care of while developing and finalizing the scope of an Android app, our developers will help you with it.

Hire highly experienced app developers, they have worked in all business verticals, they will ensure maximum usability and scalability.

Testing is a very important part of any of our app development projects, over and above bug testing, we also ensure we test for optimization.

With the app that we develop, we offer 3-month support to back up our claims of making perfect apps, everything is covered free of cost.

A non-disclosure agreement is understood by all our team, if you want one, just let us know in the requirements, we will make arrangements.

We offer flexibility in everything, be it the developer you want for your project, or the extra support you are looking forward to, we are all in.

We have various engagement and hiring models, to choose from, for the ease of our clients. It is through the working experience that we created and perfected them for the benefit of our clients.

It is hands down our most popular engagement model, the whole work is outsourced to our India office, we get it all done strictly on a budget. The whole point behind the offsite model is reducing the cost to develop Android apps, and our clients absolutely love the pricing we can offer with this model. The thing about mobile apps and particularly Android is, they need to be developed very precisely, and if you plan to get that done in the US or Canada, it could cost you a lot of your startup’s total funding, but if you get your app developed from India, you will save a lot of money.

If you go for this model, you can be laid back, as everything would be done by us under one roof. Everything related to design, development, and testing of your product, will be done at one single place, to minimize the cost, we will manage time and resources accordingly. The mobile world is ever-changing, there will be new Android operating systems every year, and that’s exactly where the fixed price model shines. With this particular model, the Android app will usually be covered for a whole lot of risks, and that would be a great choice in this ever-advancing world.

If you have maintenance or support related work or have your project already broken down to components by your project manager, this option could be highly feasible for you. With this model, we can offer low prices, and you can have all the dedicated resources you want. There are many components to be worked upon when it comes to developing an Android app, and the hour based billing model can fetch you a lot more resources, compared to your own office. With hourly based billing, you can have a lot of workforces, for a lot less money.

If you want particular components developed from our developers, or want particular ones to be tested, you can hire dedicated Android developers, for maximum feasibility. This plan is specifically for our clients who are already working on their projects and need a more permanent workforce. In the case of Android apps, you might need different developers to work on a different aspect of the application. There are various Android devices with various different hardware capabilities, the dedicated developer will get the app components set for each one and test the app for the same.

Here are some of the most popular queries we get regarding Android development.

Native Android apps are always more flexible but take a lot more time to develop over cross platform apps. Make the choice depending on your business niche and the time in which you want the app. But over and above, you must know that Native apps are the only ones that can achieve core performance that Android devices have on offer.

Android is currently ruling the mobile phone market, and if your business needs to be online in any way or the other, getting an Android app is a must to consider. It will help you to gain and deepen connections with potential customers while setting up a one of kind marketing platform for your business.