What makes hiring quality React Native developers important is the fact that it’s only them, who can create truly Native like Cross platform apps. Our top developers will have your app ready in the least time possible. 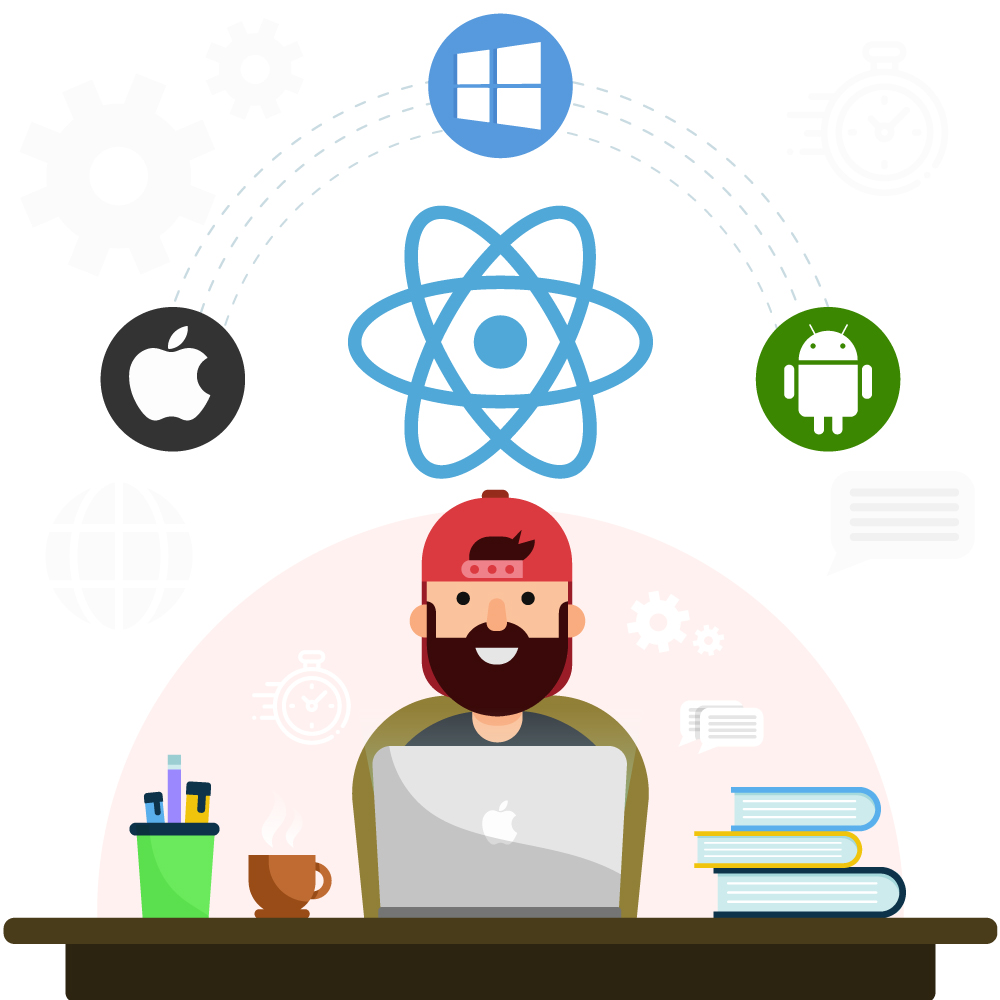 With limited time on most businesses sleeve, only a well experienced React Native developer can take up the job of creating Cross platform apps for both iOS and Android in the least possible time. When you hire React Native app developers from SemiDot, you don’t only get development expertise, but along with it, you get our expertise in creating some of the finest React Native apps in many business niches and industries.

With React Native’s code reusability, and Native components like no other, you can expect your apps to be on both platform in half the time, and ace even competitor’s Native Android and Native iOS apps. When you send in your requirements our teams of analysts and developers would go through your requirements and would then suggest the technology which would suit your project best.

EXPERTISE OF OUR React native programmers

Our top React Native app developers will get your app running in no time, these are our most demanded services in the field of mobile app development.

It’s for those who are looking for a multi-platform app in the least possible time, and we delivered them just that, in the least time, for all platforms, they were looking at.

Before React Native was developed, iOS app development through any other technology other than Obj C or Swift was considered impossible, everything has changed now.

We can create a true performance-focused Android app for your business, those gigabytes of ram would give you users the perfect framerates and optimization they seek.

This is our top choice by clients who were on a budget, and wanted a multi-platform app, for their business. We can create Hybrid apps in the lowest cost and time, through React Native.

Our React Native mobility enterprise solutions focus on achieving the next level portability for workplaces, the app will work on all the devices your employees would bring along.

We can create games that work on multiple platforms, and power-hungry games that feel truly native, all using the iconic Cross platform app development framework.

Our experience of building Cross Platform React Native apps of various sizes for various businesses, along with the expertise of our developers and business analysts, makes us a top choice.

With so many cross platform app development technologies to choose from, our analysts would consult you with the ones that will suit you best.

Our React Native programmers will make your app in the least time and cost, to ensure an early market entry and a win-win situation for your app.

Every React Native app that we develop is thoroughly tested, be it for security threats, bugs, or for future infiltration possibilities, we will take care of it all.

We offer free support for every React Native app that we create, for 3 months, beginning from the date of delivery, all bugs and errors will be resolved for free.

An NDA had been heavily demanded, and we have had no problems with signing any. Just mention it in your requirements, and we will plan accordingly.

We give you the widest options to choose from when it comes to the app development technology, this way you will be certain it will be the best.

We offer 6 distinct engagement and hiring models, you as to keep the perfect cost to quality ratio, for each of our clients. If you are confused, we will help you choose the one, which best suits your development project.

Our onsite model provides you the best of both worlds, low pricing, along with our team working in your development office, at your onsite office. We will ensure both quality and management from all ends, so all you would have left is focusing on your business strategy and goals, and you can leave the hard development and management work upon us. React Native development requires double the perfection if you are looking forward to developing both Android and iOS apps through it, and that’s where the on-site model may be the best fit for your app development project.

Offsite model is one of the most popular engagement models we have on offer, the pricing we can offer you with this is undeniably the best you would get across, in the world. Your project would be outsourced to our developers in India, which is the country widely known for its most competitive development costs around the world. Since React Native apps are already known to cost less, you can assume how much lower would be the price to get them developed from India. You can focus on saved resources and money to further perfecting the app in every possible way.

This model is also called the zero hassle model, you literally wouldn’t have to think about anything other than your business strategy, if you choose this one. This model is a superset of other models, you can choose the resources you want, where you want, how long you want, and pay a complete discounted package price for it, that too billed as the milestones are achieved. With a React Native app, the technologies are prone to change, and new devices are coming out each day, this model could prove to be a top choice in such an instance, as these risks are usually covered.

This model is popular between large to medium scale businesses, looking forward to simply outsource only certain components to be built. You will be charged a per hour price, for all the work you get done, so maximum transparency and minimum costs are ensured at all times. This model is also widely popular for people looking forward to maintenance and support for their projects. Hire React Native developers for maintenance, could lead to a pile of overhead charges, which can be avoided simply by choosing full-time hiring model for your project.

Dedicated resources are the ones that report directly to your project manager, you can assign them tasks at your own pace, and pay them an amount for the total time they spend on your project. This model is best suited for those who are planning to hire developers or designers or testers in particular, for particular parts or components of their cross-platform app development project. With the massive number of components, one must deal with React Native development solution, this option could be a top choice for everyone who already has a team and wants to speed up the process.

Here is a list of most frequently asked questions over the years, answered in the simplest way possible.

Before hiring any mobile app developer, you should know what each of the development paths offers, and after that, what each of the development technology offers. Now, when you have at least decided that you either want a cross or a hybrid app, you can come down to choosing React Native or any other technology. The top things to know before hiring React Native developers is how well they work on the apps, for that checking portfolio might be a really good option.

There are fundamental differences between the two, even though technology like React Native is capable of developing both of them. Cross platform apps are the ones whose components are built natively, and they use the device’s browser engine to render it and call the APIs, while Hybrid apps are made to run on a browser itself and have no native components whatsoever.

We create all the types of mobile apps there are, Native iOS and Android apps, Cross Platform apps, and Hybrid apps. We have separate teams for various technologies for all these mobile app types, this includes teams of different technologies for different mobile app types. Our React Native app development services have Cross platform and Hybrid apps on offer, we will ensure we build them in the least time and cost.

We offer all development services related to mobile apps and websites, along with integrating and exploring the emerging technology development space. We offer the best quality Cross platform and Hybrid apps built through React Native in the least possible time and cost, ensuring maximum RoI for each of our clients. If you are looking forward to taking your business online, we could do so in the least time and cost, compared to anyone else in the field.

Flutter 3.0 Update: Everything You Need to Know! View Details