Since the first iPhone was launched, iOS has only gained popularity and adoption. Our iOS developers have a vivid experience of developing different iOS apps for many different businesses and industries. 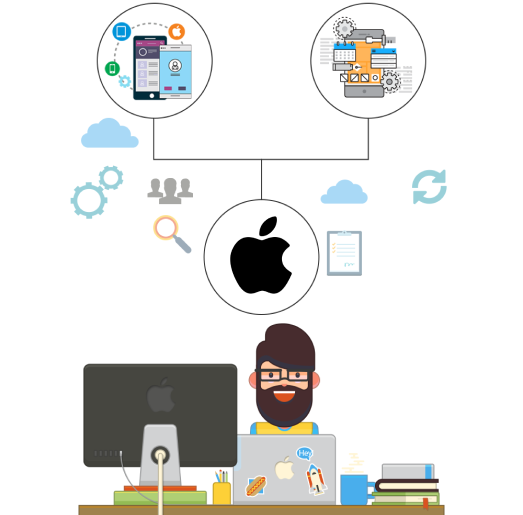 Depending on your needs, our iOS app developers make sure you get the best of iOS app development, no matter how complicated it may get. Since iOS apps are to be highly optimized to consume less battery and perform well in all situations, iOS development becomes rather typical. We suggest you only focus to hire iOS developers, those having a wide portfolio, and those who have proven their mettle in developing quality iOS apps. Our developers have a strong portfolio of building over 100+ application for iOS, for clients from all over the world.

iPhones offer unmatched performance in daily usage and applications, which when compared to Android, is considered much better by many. This reason for detailing in iOS apps is how they need further attention towards details and optimizations. iOS developers have to think more and research more than Android developers, for the simple fact of how complicated iOS is, compared to Android.

EXPERTISE OF OUR DEVELOPERS

Our top iPhone developers will get your app running in no time, here are our most demanded services in the field of iOS development.

Our team of top Objective C developers is seasoned with iOS app development. They will make the app with every core functionality and feel, that an iOS user seeks.

The games we can develop for you through our ARKit development services will be an instant hit. We will develop the game of your dreams in the least possible time.

Our highly experienced core ML development teams will ensure you can use all ML algorithms you are looking forward to, in the most cost-efficient and feasible way possible.

We have a separate team for wearable app development, so of course, how can we leave the most popular one behind, WatchOS app creation in the least time and cost.

Hire iPadOS developers to ensure maximum app compatibility of your iOS app, with the iPads. We will ensure that the app is migrated in all its glory to the new iPadOS.

You can hire Swift experts who have years of experience, with Swift being one of the core Native iOS development languages, we can make a truly custom iOS app for you.

iOS is highly capable, but digging too deep, means wasting a lot of time and resources, our experts can consult you with scope finalization.

Hire ios developer with highly experience, they have worked in almost all business verticals, we will create your app in the least time and cost.

Every iOS app that we develop is thoroughly tested, be it for security threats, for bugs, or for future infiltration possibilities, we take care of it all.

We offer free support for every project that we create for 3 months from the date of delivery. Every error or bug will be resolved on top priority.

An NDA is highly demanded in today’s times, we have no problems with signing any. Just mention it in the requirements, and we will make arrangements.

You can choose any of our developers, the top ones will cost a tad bit more, but it could really benefit you, if you have a complex project.

We have various engagement and hiring models, for the ease of our clients. You get to choose from 6 of our most popular models, whichever suits you, can be implemented for your project.

Our onsite model has been widely recognized as the best in the class model, you get the same quality of iOS app development, for less than half the price. Our iPhone app developers would be happy to work in your office and collaborate with the core onsite development team, to create top quality products. Hire iOS app developers who would be happy to work in your office, they will ensure maximum efficiency and maximum client satisfaction. iPhone apps require special intricacy, and our on-site developers, combined with your team, can do it easily.

It is hands down our most demanded model, the whole work is outsourced to us and we get it done in our India office. The whole point behind it was reducing the cost to develop iOS apps, and our users absolutely love the pricing we can offer them with this model. The thing about apps and particularly iOS apps is, they need to be developed very user-focused. If you plan to get your iOS app developed in the USA or Canada, the project is sure to cost you a fortune, but if you get your app developed from India, you can save a lot of money in comparison.

This model is for people who believe the best way to get things done is in one place only. The fixed price model is based on an ideology that everything will be done under one roof. The design, development, testing, deployment, will all be taken care of by us, the cost would be lesser when compared to other models. The Apple environment is ever-changing, there will be new operating systems and devices every year, and that’s exactly where the fixed price model shines, with this particular model, the iOS app will be covered for a whole lot of such risks.

The hourly basis is mostly for clients who require maintenance or support work. We charge an hourly price for the developer which we assign to your project, you can at any time assign tasks, or they could overlook everything that happens to the project and maintain it accordingly. There are several components to be perfected when it comes to developing an iOS app, and through the hour based billing, you can get a lot more resources, compared to your own team. With hour based billing, you can have a lot of developers, for a lot less money, compared to other models.

Dedicated hiring is for those who already have everything set and in place, the plan, the wireframe, the components which are to be made, and integrated. With this model, you can hire iOS developer that can get the work done efficiently, they would always prioritize your work, above everything else. In the case of iOS apps, you might need different developers to work on different components of an application. There are various iOS devices with various different hardware capabilities, a dedicated iOS developer can set the app perfectly, for each device.

If you have any doubts, we have compiled some of the frequently asked questions from our clients, to help solve your doubts.

iPhone users love optimization, and a top iPhone app development company knows it very well. Hire iOS developers who know the roots of what users love about an iPhone, that will be the only way to make users adapt to your app and in turn, to your business. The prices will not only vary on the experience, but also, on how well the iOS expert understand the iOS ecosystem, keep it in mind when searching them for your project.

If you are providing a service that revolves around the needs of a user who loves optimization, a native app, especially for iOS, will always prove to be worth it. The fact that Native apps are the truest in terms of Native feel stands tall, and no matter how much you optimize Cross platform or Hybrid apps, the same feel can’t be achieved.

Hire a dedicated iOS developer depending on your business niche, if you want a quick app that works on both Android and iOS, go with cross platform app developers. If you are looking for added optimization and detailing, nobody but a quality iOS app developer could help you achieve that. The prices and the output for both will be very different, so a direct comparison isn’t really possible.

Our iOS developers will make an app that is optimized for all supported iPhone generations and other Apple devices that use iOS as their operating systems. But since iPadOS has been separated, we have also started offering services to create hyper optimized iPadOS development apps. You also get the option to hire iPad developers, in case you are specifically targeting the audience that uses iPads.

Top AngularJs Libraries to Use in 2021
View All Articles