Loves working with Startups and Entrepreneurs to create a better world. CEO & Blockchain… 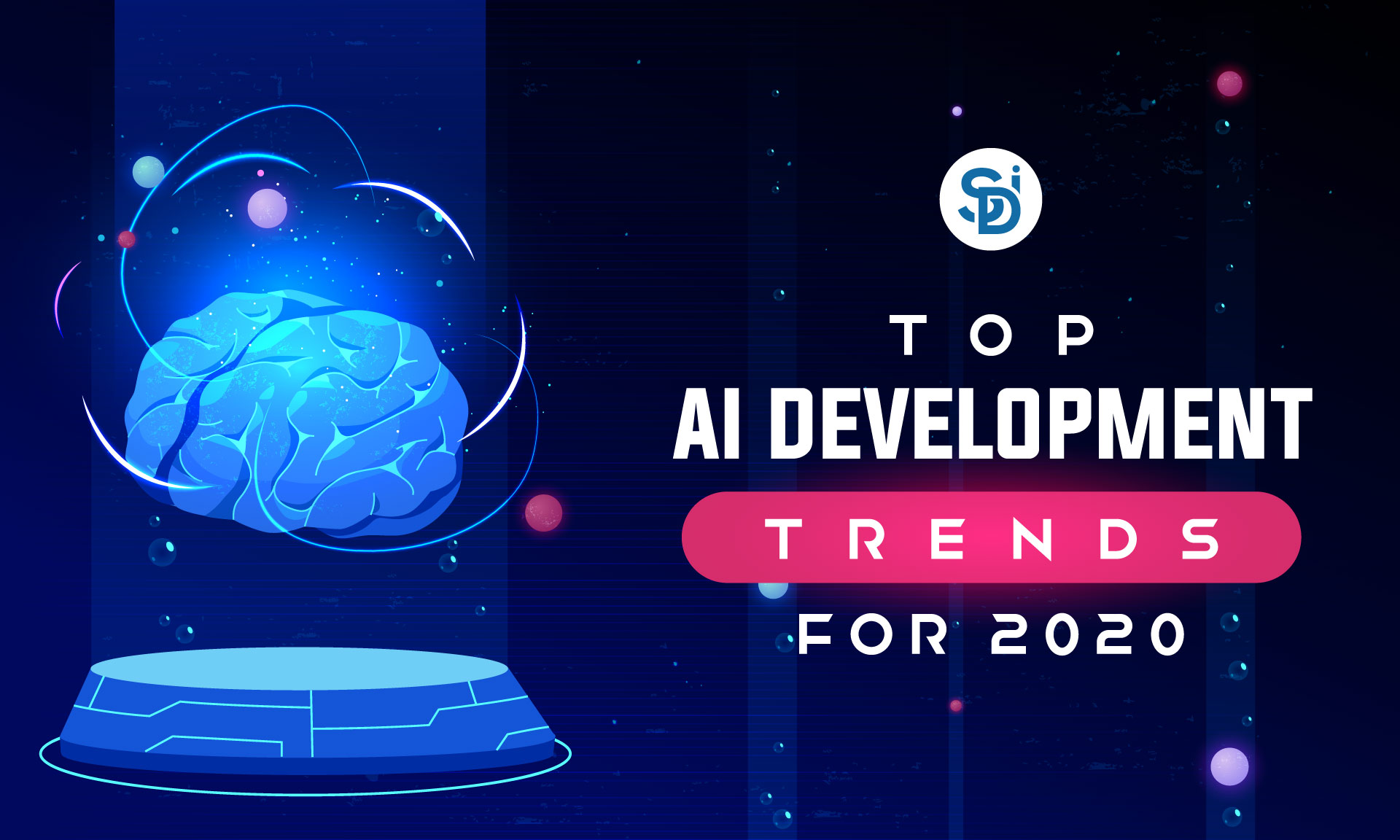 There have been some serious breakthroughs in AI in the previous decade, we believe it’s only going to get better further ahead from here. AI development trends in 2020 surely hold real potential, with technologies that complement AI advancing rapidly. We are at the top of our game when it comes to data science and machine learning, if you are already familiar with AI, you might recognize both of them are pillars of AI.

We would be eyeing at a more advanced AI than what we have today, don’t confuse it with the extreme AI, or smart AI. The power and data-hungry AI we have right now would be greatly improved in 2020. And we believe, AI’s implementation trends are only going to be more widespread in the coming decade. We may be very far from a truly smart AI, but that doesn’t mean we won’t get there.

Let us begin with what AI is, for our folks who haven’t peeked in the technology yet.

Artificial intelligence is, as the name suggests, a program that can think and perform tasks on its own. Think is a really heavy word, it’s even hard to describe in words what think truly means in AI’s context. We would rather like to limit it to just learn and perform, with the AI we currently have. Artificial intelligence development companies are trying their best to make AI smarter and better.

In some time in the future, AI would get data feeds, and perform appropriate actions it learned from deep learning, and machine learning, all on its own. Think of it like AI could drive a car, fairly equivalent to humans, but can never match the intuition of a good human driver. In the future, with advancements in AI development, AI may even surpass our intuitions and be better drivers than us.

We know well how the future holds AI-driven cars, but that could only be successful when all the cars on the road are driven by an uber-connected AI. This is also one of the top AI developments we will see in 2020, Uber is working hard on generative neural networks. The automotive industry is one of the most important ones that fit in our lives, we believe we are in for a ride, with AI implementations going strong in 2020.

Defining AI gets tough, with so many implementations and levels of AI, but we hope you at least got the basic idea behind it. In short, it goes straight from making your morning coffee to a possibility that AI could obliterate humans one day. But speculating won’t do any good, that’s why we would keep the scope of this article concise to top AI trends for 2020.

Done with customary of defining AI, let’s begin with the real deal now.

Here are the top AI development trends for 2020.

Health devices around the world are making full use of AI. The simplest and the best example we have is the Apple watch. Starting from series 4, there is a feature called fall detection, the watch would automatically call emergency services if it detects a hard fall. A lot of machine learning goes into it, and the AI is responsible for making use of all of that.

Our lives would be highly improved in the time ahead. Rumor has it that the next-gen Apple Watch, for instance, would be able to measure blood pressure. Just think about the emergencies that would have gone unnoticed if the watch wasn’t able to detect falls and arrhythmia. The AI in healthcare would be saving real lives, and it would only get more advanced in 2020.

Apart from improving the daily chores of life, AI in healthcare focuses on drug discovery and surgeries:

Medicine need precision, and a lot of time to make new ones. AI would drastically reduce both the time and effort in drug discoveries by improving on the cell count part. AI enables things to be faster and better, all due to more precision and no downtime. It would enable medicine personnel to focus on other things and eases the pressure off them, by doing mundane tasks on its own.

A complete automated surgery seems a bit farfetched for now and being honest, nobody would want to be operated by a robot. But what AI is doing for surgery is assisting surgeons with facts and figures, along with enabling super high precision surgeries. It’s in the base phase for now, but we think we aren’t too far from seeing minor surgeries done by robots.

Name a more iconic duo, we will wait. IoT and AI together make the perfect couple, and both are kind of a wasted potential when used without each other. AiiOT has had its fair share of buzz around the tech world and is expected to be adapted and worked upon more in 2020. Both of them go hand in hand, the AI feeds on data generated by IoT devices, and AI goes on being the brain of them.

This will also be one of the biggest advancements in AI to look forward to in the coming decade. IoT has been mediocre, to say the least, AI will make it go leaps and bounds when we improve upon it. IoT in manufacturing is also expected to get a serious boom in the coming year and would be one of the most important AI development trends of the decade.

Blockchain would enable us to protect data or at least keep track of it. With the huge datasets being fed into creating AI, it’s the only time, until blockchain becomes a sheer necessity. Espionage will be an unnecessary evil that would tag along with AI. Our way out? The blockchain, of course. In fact, it is one of the only ways we can do it right, giving so much power to the AI can lead to our destruction, so we need to work on it.

Read more: How BlockChain Consultation Can Help Your Business To Grow Faster?

What we need to keep AI in check is a distributed ledger, one which only humans can modify or read. Both data monetization and data required to develop AI would be fetched from real users. The only way for that to happen is by putting blockchain as a symbol of trust between users whose data is being collected. But using blockchain and AI together would mean draining the world of a lot from its total computing power, and that’s the challenge that awaits.

A Blockchain development company needs to tweak Blockchain to make it work with AI. We can hope for some distributed ledger made specially to aid the trust issues users have with AI, it is a necessity considering AI could only progress with real users’ data. It has been speculated the fourth industrial revolution will be built on blockchain and AI. In 2020, we can hope for things to propel forward, it is in fact, the collective good for both decentralized tech and AI.

Industry 4.0 has very high hopes from AI in manufacturing. Large scale manufacturing corporations have widely adopted AI, simpler or complex varies on their requirements. Many ML development companies are working hard in data science and AI, and have been doing great for automating heavy machinery. Another industry that is benefitting from the same is the logistics, there are completely automated warehouses for now, and they would only be getting more widely adopted in 2020.

The main advantages of AI in manufacturing are:

• Great RoI, which increases each and every year if all goes well.

As we said above, it is mostly the big corporations that are making the adoption. The fact comes down to the high cost of such manufacturing machines, and the software (AI) required, to run them. The RoI is great, too feasible for the big corporations, but it isn’t even close to drawing a profit for small companies. Quality is what we would be eyeing with the next industrial revolution, AI would be playing a very big part in achieving that.

Almost every smartphone in the market comes with a virtual assistant, be it Siri, Google assistant, or Bixby. We believe we are eyeing the general tasks such as playing music, calling contacts, and simple tasks on the phone being achievable without the internet. It is a big boon when those precious seconds are wasted for processing, it is one the reasons why not many people prefer virtual assistants.

Imagine being able to filter those excel sheets, sending work-related emails, all with your voice or simple commands. Sweet, isn’t it? Microsoft has already announced it has enabled Cortana for the Outlook iOS app. We hope that in 2020 they would finally be adding a virtual assistant to PC Office. Virtual assistants in workplaces wouldn’t just improve productivity, it would greatly improve on the peace of mind of the employees and directors alike.

CGI has made its way into our films, and which today’s technology, it seems as real as the real thing. This isn’t the only application of CGI, companies have started to see another potential position to fill for it. We know how AI cannot work without data, and for somethings, data couldn’t be fetched or simply doesn’t exist. That’s exactly where CGI fits in the equation, to create data for learning purposes of AI.

The elections of 2020 are hanging on the fact, if we can do something, about the deep fakes’ problems. The fakes are getting more and more perfect with each passing day, our only hope is an AI aided differentiator which can sort out the fakes and original.

AI assistance in CRMs and ERPs isn’t new, it started a few years back. But the number of jobs created from AI adoption in CRMs is massive. According to a white paper published by IDC in 2017, there would be 2.3+ million new jobs created worldwide from AI-assisted CRMs.

When we take in ERPs too, the number only gets higher and higher, we are talking about trillions of dollars, along with millions of jobs.

Sales automation, intradepartmental processes, module sharing and selection, and many more things, would be directly eased up with a wider AI adoption. An artificial intelligence development company could help you with customization AI development if you want to jump forward in a particular direction for a particular CRM or ERP. In 2020, we can hope to see more jobs being created with how well AI adoption is going in the service industry.

AI holds the key to our future, it will aid in medicine, help us innovate and invent, and drastically improve our lives. We might have gone a bit far from the timeline we discussed, 2020 has stated already after all. Some of the things we mentioned might not be completed till the end of 2020, but work on them has either already begun or will begin by the end of the year. Python and AI go hand in hand, you need to hire Python developers who have full fledged core python knowledge.

The industries and verticals we discussed aren’t all of what would be revolutionized by AI, the list isn’t exhaustive. AI will change our lives in more than a million ways, so it is sure to affect every industry, every niche, on and off the planet. The year has just begun, and many projects have already started implementing AI in their respective fields. We guess we will have to wait and see, what unfolds with this iconic technology.

Loves working with Startups and Entrepreneurs to create a better world. CEO & Blockchain Application Developer but a creator by heart.